Guest Post: Nina Burleigh, contributor to the anthology Dancing at the Shame Prom 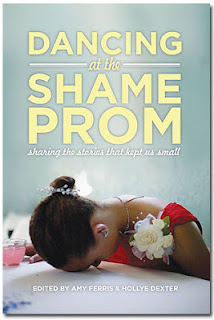 Welcome Nina Burleigh, contributor to the anthology Dancing at the Shame Prom, and a post about being a woman in the Middle East.

Unfortunately, I have yet to receive the post.  Allow me to assume the position of the girl on the cover of the book other there to the right.

Coming soon ... As soon as I get the guest post, you will see it here.  Right here.  In this big open space right here.

Wanna hear a prom story?  Okay, so I was never a woman of the Middle East but I did grow up in a South East-ern town of Pennsylvania.  And, get this, I went to the prom on a double date with my now husband - only, and this is scandalous, he was my at-the-time best friend's date.  And the guy that was my date is still a friend of ours and he had his first child, a son, on the same day -the same exact day - as we had our first child, a son!

That story wouldn't qualify as shameful enough for the anthology.  Those stories have a lot more to them.  Check it out:

Dancing at the Shame Prom: The Stories That Kept Us Small

Whether it was the one-night stand you always regretted, the family secret you never revealed, or the emotional abuse you endured in silence, there are some things you are so ashamed of you keep them hidden for a lifetime. Shame can hold you back from what you love, diminish your sense of self-worth, and prevent you from fully being who you are. But what happens when you finally relent and share that secret burden?

In Dancing at the Shame Prom: Sharing the Stories That Kept Us Small (, Seal Press), editors Amy Ferris and Hollye Dexter encourage readers to confront this powerful emotion head-on. They gather together 27 gifted and talented writers who reveal, explore, and embrace the root of their shame, in the process demonstrating the strength that comes from defeating their demons.

In a brilliant display of bravery, these writers share their darkest fears, offer up their most vulnerable moments, and reveal jaw-dropping secrets. Journalist Nina Burleigh discusses the shame she felt at being coerced into posing for "artsy" naked photos in "Year of the Rat." In "Playing Dead Under the Family Tree," Monica Holloway shows how her husband's infidelity initially isolates her with the shame of being alone. Meredith Resnick's story "Original Bra" weaves together her complicated feelings about body image with her quest to buy her first bra. From spilling long forbidden secrets to revealing their innermost faults, these authors openly share poignant and life-changing moments of humiliation, embarrassment, and despair, along with the wisdom they learned from letting go of the shame that's been weighing them down.


Freeing, provocative, and audacious, Dancing at the Shame Prom is about divulging the secrets that have made you feel small so that you can stand up straight, let the shame go, and finally--decisively--move on with your life.

Dancing at the Shame Prom is available in print and e-book format at Amazon,  Barnes & Noble, as well as your local independent bookstore.
Posted by Audry Fryer at 12:45 PM No comments: 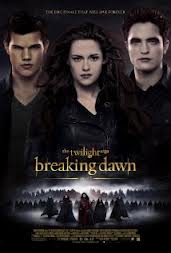 Yes, my friends (including the fabulous friend who rallied us together to celebrate her birthday at this event) and I were most likely the only ones in our age bracket attending the movie who were not chaperoning a “tween”/teen.

Yes, the show-time was way after my usual mid-lifer bedtime routine.

And, yes I awoke the next morning thinking, like Bella in the movie, I had achieved immortality:  (I really did!)

My face was pale, too pale – perhaps it could be lack of sun and make-up, but still…  My lips were red – and chapped so I had applied pomegranate flavored lip balm, but still, they were red … My eyes were red, too – bloodshot from lack of sleep actually, but still, not their normal color … I had a thirst, a deep desirous thirst – not for blood (that’s just gross).  No, it was for coffee, a thirst for caffeine.  I went to run from my bedroom to my kitchen at inhuman speed - like Bella ran through the forest of the Pacific Northwest 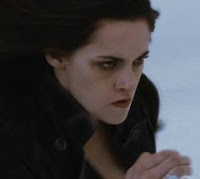 (about that part in the movie, I was anticipating her unexpectedly smacking into a tree – I mean, speed plus trees equals smack, am I right?)

… as I was saying, I went to run like a blur to the coffee pot and … Ow, crick, crack - I moved at the not quite forty, mother of three speed which wasn’t very impressive at all …or immortal-like.

Finally, yes, I had not achieved immortality - though I would have enjoyed being able to move that quickly - (Think of how much time I could save at the supermarket!)  But, I did feel twenty years younger sitting at the movie on opening night – and that counts for something!

Hey, blog readers, have a Happy Thanksgiving!
I’m off to bake a few pies and then, continue writing the exciting last hundred pages of novel #2: Secrets, Lies and Apple Pies.  (Hmm, maybe I should include a werewolf with a hot man body and a forbidden vampire romance … Ha!)
Posted by Audry Fryer at 10:01 AM No comments:

Delicious news or even fattening news depending on your perspective:

As I continue conducting research for my novel in progress, “Secrets, Lies and Apple Pies”, I’ve moved away from how to properly overindulge at a German Beer-fest to learning more about the fine art of pie-making.  And, I’ve discovered that I need brush up on my pie making skills - so what better timing than this month of feasts and culinary challenges!

Pin-worthy:   I’ve launched a new Pinterest board dedicated to all things (no not "Audry" this time) … wait for it … pies!  Yes, pies!   I bet you’ll never guess the title.  Yup, “Secrets, Lies and Pin-worthy Pies”.

Easy as pie.   Hopefully, the timing is perfect for all you bakers (or once a year bakers) out there.  Got a great pie recipe, apple or otherwise?  Comment here with the recipe or where I can find it to re-pin it.  As for the phrase, “easy as pie”, from my experience attempting to create one from scratch, the only thing easy about pie is eating it!

Happy Baking!  Now, it’s time for my main character to get baking!
Posted by Audry Fryer at 10:24 AM No comments:

Fortunately, Hurricane turned Superstorm Sandy created minor havoc around my area.  We did lose power, but for a mere 24 hours.  Perhaps our greatest inconvenience (and, trust me, compared to the images I’ve be seeing over the past week, I really can’t complain) was that the bus couldn’t make it out to us due to fallen trees and downed wires blocking roads.
My neighbor kindly drove my oldest son to school in the morning as she was heading there anyway and so my twins who have afternoon kindergarten could stay in their pajamas.  As my neighbor drove along, she commented to my son how strange it was that we’ve had these two big storms around the same date in October for two years in a row.
Flashback to last year:
Not a Superstorm, but a Nor’easter was to blame.  (And there’s a Nor’easter expected to move in later today – the South is starting to look more and more appealing!)