The Legend of the Holy Cow

Once upon a time, not so long ago, a boy's preschool class was planning to present a live Nativity scene.  The entire class was to dress in the various parts and assemble on stage in the gym/auditorium during the Catholic Academy's annual Christmas production.  Three years ago, the boy's older brother had been chosen to be Joseph - a fact he still smugly brags about.  The boy's twin sister had been awarded the part of the Christmas Star - which suited her personality quite well.  The boy was given the part of a king, a Wise Man!  He liked the idea of wearing a gold crown and of the importance of the role.

On the day of the rehearsal, the teacher assembled all the children into their different places upon the stage.  There was a problem:  one too many kings.  The teacher, knowing the boy to be of an easy going nature, asked the boy to switch his part to that of a cow.  The boy agreed and smiled.  At home, he did not smile.  He cried to his mother over being demoted from a king to a cow.  His mother thought about approaching the teacher, but the boy didn't want her to say anything.

Instead, his mother started recalling the story of the first Christmas.  "The kings didn't even arrive until way late, like sometime in January.  By then, all the decorations are down and the tree is out on the curb.  But the cow and the animals in the stable, they were there the whole time.  In fact, when Mary and Joseph arrived and couldn't find a place to stay, it was the farm animals that stepped aside and made room. When Mary gave birth to Jesus, she didn't have anywhere to lay Baby Jesus down.  It's not like Bethlehem had a Babies 'R Us or a Target for Joseph to run out and get a crib."

The boy seemed interested in the story, so the mother continued.  "It was the cow that performed the first good deed, a true Christmas miracle.  You see, in the nativity scene, Baby Jesus lies in a manger.  A manger is actually a feeding trough for the cattle.  And the hay is the cow's food.  The cow actually stepped back and gave up his dinner so that Baby Jesus could have somewhere to rest.  And that is The Legend of the Holy Cow."

(And, yes the cow is holy in India for completely unrelated reasons.  But, let's keep focused on one religion at a time here, people.)

At this point, his mother broke into song, an off-tune version of Away in a Manger.  The boy felt much better.

On the day of the Christmas production, the boy gladly performed his role in the Nativity scene as The Holy Cow.  And, with his twin sister shining above him as the Christmas Star... 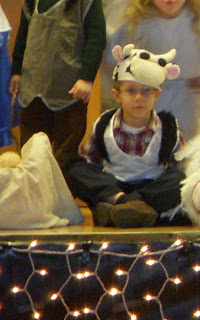 Is anyone else suffering from 80's Nostalgia? 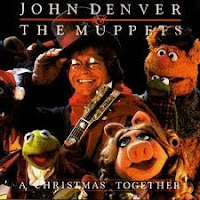 This weekend, my husband and I took our kids to see the latest Muppets Movie.  My five year old twins were all for it, but my seven year old bawked, "boring."  My husband and I argued with him that we loved the Muppets when we were growing up, so it must follow that all three of our children would love them, too.  Heck, I don't dust off the old John Denver and The Muppets Christmas album every December for nothing!

Sometime during the first half of the movie, my oldest son stuck to his guns and whispered, "See, I told you - boring."  Kermit was reminiscing about the good old days - you know, the late 70's and 80's.  That bygone happier time, so, so, so long ago.

Hey!  Back it up a second.  I was alive back then (albeit a child and a teen).  When did the 80's become the good old days?  At the beginning of this year, the same son muttering, "boring", had asked, "You were alive in the last century.  What was it like?"  I replied, "It was the same.  Well, minus the internet and cell phones, but mostly the same.  Now, go build with your Legos or play with your Star Wars figures or go watch The Smurfs on Boomerang or help your sister with her Easy Bake Oven."

One last thought:  On the Muppets' Christmas album, when John Denver sang, "Merry Christmas little Zachary", I guess that Zachary's now a middle aged man with a receding hairline and a beer gut.  Oh, where did the time go?