Welcome to an author who's not too famous ... well, not yet, anyway. If had to guess, today's guest poster, Cara Sue Achterberg, author of two intriguing reads, I'm Not Her and Girls Weekend may soon get her wish to become famous.

I'm so excited to host Cara Sue Achterberg here on All Things Audry! Not only is she a fellow writer-mom of PA, I am also truly inspired by Cara's writing career this far. Her first book, I'm Not Her, reached a ranking of #2 on Barnes and Noble's Nook Bestseller List, was chosen as a best new fiction pick by ibooks in addition to making the top 100 ibooks bestseller list for fiction and literature and was named to Kobo's Page Turners list! See, like I said, maybe not so famous now, but ...


When I first set out to write a book, I naively thought that all I had to do was write a really long story. I figured the sheer fact that I’d been able to string together 100,000+ words was such a feat that it would only be a matter of time and I would become famous. I tidied it up and send it out to an agent, waiting for her to call me up and say, “Oh my gosh, what a phenomenal talent – this will be the next best seller!” But that didn’t happen. In fact, that didn’t happen nearly 100 times.

That first story was cliché and verbose and trying much too hard. After I slunk back to my computer with my tail between my legs, I began looking for help. Help came in the form of books, websites, bloggers, writing classes, workshops, and conferences. I kept plugging away. Writing every day. I stopped thinking about becoming a famous author and began to focus on telling a good story. And then it finally happened! (the author part, maybe not the famous part.) My novel, I’m Not Her, was published this past August by The Story Plant.

I’m Not Her is told in first person by the two main characters- Carin and Leann. They are vastly different. Carin is a gorgeous, entitled young adult who has cruised through life on her looks and her parents’ money. Leann is a morbidly obese check-out clerk who had a baby at 16 and wound up living on the edge of desperation. They end up living each other’s lives, learning what it is truly like to walk in another person’s shoes- someone they had up until that moment judged rather cruelly.

The original manuscript told only Carin’s point of view. When I was writing it, I could clearly hear Carin’s horrified voice as she discovered she was marooned in a 350 pound body. I worked on the story faithfully for months. I couldn’t wait to sit down each afternoon and see what would happen. When it was finished, I reworked it for even longer until I thought it was pretty decent. What it needed at that point was a structural edit, but I didn’t have that kind of money, so I entered it in a few contests that offered feedback. One judge liked the character, loved the story idea, even liked my writing, but she said that without Leann’s side of the story it didn’t work.

So I sat back down and wrote the story again from Leann’s viewpoint. What was it like to go from a 350 pound outcast to a body as beautiful as the soap opera stars she binged watched?

And then I weaved the two stories together, giving them each a chance to chime in. I knew the book would only work if I could nail those voices. They were polar opposite women so they would have drastically different voices and experiences. I’m not sure Leann and Carin’s voices would have been so drastically different if I hadn’t had the time and space between their telling. That’s not to say that every writer utilizing the idea of alternate voices has to wait a year between the writing, but she might want to leave a little room.

A few other tools I used were to always write Leann in one font and Carin in another. For some reason that helped me find their individual voices. Carin’s came in a neat Garamond font and Leann was in a childlike scrawl. I also read each passage out loud, listening for voice. The biggest problem I encountered was cutting the manuscript down to a manageable size. I had to figure out which scenes were most important for each of the women.

But that’s something every writer has to do. Cut the fat. Kill your darlings, as Stephen King says in his book On Writing was a great resource for figuring out how to trim the size of my story.

After the book was published, it touched my soul when I heard from an inner city public school teacher who said she knew Leann and her little boy. She said she’d never considered what her students went through on a daily basis. A vlogger who has always struggled with her weight reviewed my book and talked about how painful it was for her to read, but how important it was that we talk about it. I heard from plenty of readers who told me that the characters made them think about how they judged others unfairly on a daily basis. I was humbled time and again by readers who found wisdom I certainly don’t possess in the story.

I guess what this meandering post is trying to say is – be faithful to your story and give it the time it deserves so that its truth can speak. Don’t worry about becoming a famous author. Tell your story – because it’s not about you, it’s about the story.

Thank you, Cara, for your honest and inspiring guest post! I absolutely love its message! 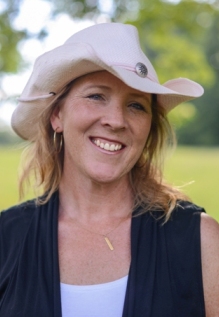 Cara Sue Achterberg is a writer and blogger who lives in New Freedom, PA with her family and an embarrassing number of animals. I’m Not Her is her first novel. Her second, Girls Weekend, will be released May 2016 by The Story Plant. Cara’s nonfiction book Live Intentionally is a guide to the organic life filled with ideas, recipes, and inspiration for living a more intentional life. Cara is a prolific blogger, occasional cowgirl, and busy mom whose essays and articles have been published in numerous anthologies, magazines, and websites. You can find links to her blogs, news about upcoming publications, and plenty of pictures of her foster dogs at CaraWrites.com. 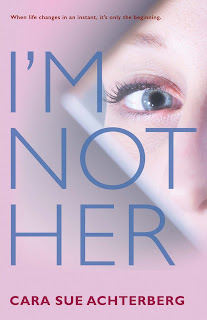 I’m Not Her
I’m Not Her is a work of womens fiction with crossover into YA and New Adult and even a little mystical realism. When a Valentine's Display topples on Carin's pretty head and lands her in Leann's difficult life, both women must face lives they never imagined. Carin, a gorgeous, self-absorbed, entitled young adult, unintentionally swaps lives with Leann, an uneducated, perennially poor, morbidly obese check-out clerk. When Carin’s boyfriend and mother don’t recognize her in her Shop n Save apron and no-name sneakers, she has no choice but to assume Leann’s sad life. Meanwhile, Leann wakes up in a body and life much like the soap opera stars she loves. More than a case of trading places, I'm Not Her explores the question of whether appearances or circumstances make us who we are. It's a surprising tale about the way the world sees us and the courses we are on. 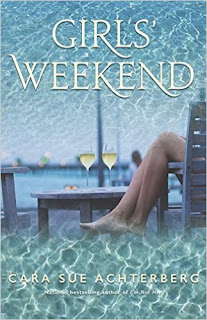 
Dani, Meg, and Charlotte have bonded over babies, barbeques, and backyards, but when they escape for a girls weekend away, they can’t bring themselves to return to lives that don’t seem to fit anymore. We all think we will be different. We won’t be facing down forty and still wonder when life starts. Girls Weekend is a fun, yet poignant romp through the universal search of who we are, why we love, and what makes us happy. Look for Girls Weekend this May! (or preorder it now!)