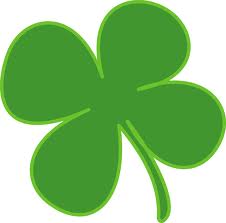 I'm feeling very "lucky" to share with you the opening excerpt of my next novel (which is still very much in progress and will be for a few/several months).

As you will read, Lucy is a down-on-her-luck character with an unlikely sunny disposition. Soon, Lucy's luck will change after visiting her "hippie" mother in Los Angeles results in winning a trip of a lifetime on The Price Is Right. I am still ironing out the details of how the story will unfold. Yet, one thing is for sure: the theme of luck will play a major role!


How Lucy Got Lucky
by Audry Fryer
What is luck? A four leaf clover plucked from the warm Earth may be lucky for the recipient, but not so fortunate for the clover. A lucky rabbit’s foot surely wasn’t such a welcome fate for the rabbit. And, that penny lying face up on the sidewalk? Think of the person who dropped it. As for me, I identify with the rootless clover, the three footed rabbit and the penniless soul. Some might call it a run of bad luck. Others may call it being misfortunate. I call it normal.
There’s a level of security when you’re consistently on the wrong side of luck. It’s sort of an upside to a downside. I don’t play the lottery. And, in that way, I never loose. I don’t believe Prince Charming exists. And, in doing so, I save myself the trouble of a broken heart. I am certain I will never land a dream career.  And, because I lack such aspirations, I am free to feel grateful that I have a job at all; even if it is plunking mediocre diner food accompanied by room temperature coffee in front of the good people of Scarlet’s Mill.
Who’s to say that good luck is really good and that bad luck is really bad? Honestly, how does a four leaf clover pressed between wax paper and hidden in the pages of a heavy book make all your dreams come true? Does having a rabbit’s foot dangling from your keychain magically transport Mr. Right to your door? Does that penny you found beckon untold riches? No, no and no.
Is the bad luck of being locked out of the home of your good-for-nothing boyfriend really so bad? For those unaccustomed to such ridiculously absurd circumstances, standing out in the cold could be seen as a major imposition. I, however, am unfazed as attempts to call said loser boyfriend have not met with success; nor has forcefully banging on his door.
Why would he awaken to let me back in? I had let myself out at a much earlier hour than he prefers to rise in the morning. And, poor Nate was probably exhausted from last night’s two brief episodes of what he calls “sock knockin’”. (Yes, he does keep on his socks.) Anyway, I wouldn't be attempting to break back into his house if it wasn’t for my car not starting.
Many people who live far more fortunate lives would be frantic by this point. They wouldn't know how to come to terms with how the door had locked as if by magic behind them. Nor could the average person reconcile how every door in the house seemed to be guarded by a military grade security system.  Plus, by this point, most people would be cursing their car in an enraged state of disgust. It’s how I differ from nearly every person in this town if not the entire world. Bad luck follows me like my shadow. So why shouldn’t it start to snow as I decide to walk the nearly mile to The Scarlet Diner where I’d surely be late for my shift?
Here, again, is the upside to the downside. When my shift is over, I will consume an over-sized, fat laden meal without one worry of the calorie count in honor of this long, freezing cold trek. Plus, it really is pretty in a winter wonderland sort of way. There’s something about how a smooth, blank canvas of snow can hide a small town’s many imperfections. I wouldn't have appreciated the scenery nearly as much from behind the wheel of my car. Now, I have the length of this walk to do plenty of appreciating, calorie-burning and, let’s not forget, stewing about a boyfriend I’d like to dump.
I pull on my sunshine yellow mittens and tighten my matching scarf, both hand-knitted by my mother.  As I pause to look back at Nate’s house, I can’t help feeling like his house is giving me the cold shoulder; much like Nate did last night when I asked him to join me on a trip to visit my mother in .  “L. A.? No way,” Nate had poetically said. He has a thing for rhyming, if I haven’t mentioned it so far.  “Want great? Ask for Nate,” reads his Realtor slogan printed in large block letters on signs poked into the front yards of several properties in and around Scarlet’s Mill.
I turn in the direction of the diner and start walking; positive that if I come across one of his Realtor signs, I may have to rip it out of the ground and throw it. Oh look, there’s one … frozen solid into the ground … just my luck.

Thanks for reading my excerpt! I hope you enjoyed it.

Again, if you would like to share what think of it, leave a comment here or on my Facebook Page. I would love to hear your thoughts! Now time to get back to work on the rest of the novel. I'll leave you with this one last thought (well, actually, it's a joke):

What do you get when you cross a four leaf clover with poison ivy?  A rash of good luck!