5 Lessons My Kids Taught Me About Creativity 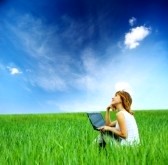 Last month, I announced my intention to participate in National Novel Writing Month (a.k.a. NaNoWriMo). The goal was to write an entire novel in the span of thirty days. The result of this endeavor would turn out much different than my original intention. (Sigh!) I fell far short of writing an entire novel. How short? Well, if it were a race, I tripped on an untied shoelace at the starting blocks and never got up.

If every dark cloud has a silver lining, here's mine: I learned several invaluable lessons about the creative process last month. And I learned them from an unlikely source, my children.

November may have been a writing marathon for some, but for anyone with young children, it also meant "Parent - Teacher Conferences". As I sat through each conference for each of my three very different kiddos, not only was I filled with motherly pride, also I was struck with a kind of awe at my children's ability to express themselves so naturally and so imaginatively. It's not that I have some awesome writing gene that I have passed onto my children (although that would be supercool). It comes down to the fact that my children are, well, children. They are not impeded by adulthood vices, insecurities and pressures. As I spoke with each of their talented teachers, I realized a thing or two about creativity. And I discovered how I had sabotaged my goal of writing a novel in a month long before I figuratively put my feet into the starting blocks.

Lesson #1 (from my oldest son): Enjoy the process of creating.
I'm reminded of one of my all time favorite holiday movies, A Christmas Story. Remember when the teacher scrolled the writing assignment on the chalkboard and the students moaned in response? Fortunately, my oldest son's Fifth Grade teacher is the exact opposite. She treats writing as an adventurous endeavor rather than a chore. It seems when it comes to creativity, enjoying the process makes for an inspired finished product. My son got an incredible kick out of his teacher's suggestion to use the names off paint sample cards as descriptive words in his essay. As a result, the sunset in his final draft popped with color and imagery! As for the rest of his essay, it brought back wonderful memories of our beach trip last August, a trip he clearly enjoyed at the time and once again, as he wrote about it.

Lesson #2 (from my daughter): Create/Write with wild abandon.
When my daughter writes in her Second Grade classroom, she doesn't worry about what her classmates will think of her when it's "sharing time" or whether every word is spelled correctly or if her penmanship is perfect. She writes quickly, getting down her every thought as it comes into her head. When you read one of my daughter's lively pieces, it's as if she's standing right there talking to you. All of her wit and her spunky personality shines through every word (misspelled or not). If my daughter worried about how her work would be received by her peers or how to correctly spell a word before continuing forward, all that beautiful prose would be lost. I imagine she would be stuck on the second or third sentence when time was up. Her childhood exuberance allows for an imperfectly perfect first draft. If you follow my daughter's example, second drafts are for revision and all the other nuts and bolts. First, let it fly. Fill that blank page and then, flip it over and cover the back side, too!

Lesson #3 (from my youngest son): Life is challenging. Create anyway.
As I have written in a prior post, my youngest son faces real challenges when it comes to language. You would think that would translate into a parent-teacher conference filled with tense conversations about how to motivate my son to toward activities that involve reading and writing. So, imagine my pleasant discovery that my son had written with the same wild abandon as his his twin sister. My son has always displayed a fantastic imagination, yet, how with all his difficulties (real, documented difficulties) would he ever be able to share his thoughts and grand imaginings on paper? The answer? He simply put his pencil to the paper and wrote an epic tale of knights and swamp monsters to the best of his ability. He didn't let any of his difficulties stop his story from pouring over three pages. When he was finished, yes, there was definite evidence of his challenges with language. The amazing thing? None of those errors really mattered. He had expressed on paper a story of a hero battling uninhibited toward a tremendous victory. If you asked any of us at the conference, we would have said my son was the real hero.

Lesson #4 (from all three kids): Make time for creativity.

Okay, so my children don't add "creative time" into their schedule of events on their individual calendars. They do, however, make time, like most children their age, to play, to create and to generally let their minds wander. And, when they're at school, their teachers actually do schedule time for creative expression. However, as adults, unless your job requires it, very few of us prioritize time for play, for creativity or to generally let our minds wander. Last month, when I should have been writing entire novel, I managed to prioritize everything from worthy tasks like food shopping to time sucks like every social media site over making time to write. Worse than the fact that I don't have a new novel in the works is that I denied myself time to do something meaningful and rewarding. So, yes, schedule time for creativity or, at least, give yourself permission to play even if it's only a half an hour a day.


Lesson #5 (from all three kids): Creating = Joy
Here's the best lesson that all children seem to intrinsically know, creating equals joy, plain and simple. In adulthood, it's all too easy to equate what you have created with money and fame. Sure, a creative life could lead to financial and personal gains, but it's not a given and, most of all, it's not the point.  When my children create something, the best they can hope for is to have it displayed on the refrigerator or to share it with other family members. They don't expect a paycheck and they don't look for reviews written by strangers. True, life demands a paycheck and in order to get one, you need positive reviews. But, that's a lot like writing the second draft before the first. There's a joy in creating that must be valued and protected. My kids understand it. Children universally naturally seek it out.  It's something I had forgotten and I'm so thankful to my children for reminding me!

For more about my writing endeavors
(that I actually completed),
check out:

And then, get out there and create!
Posted by Audry Fryer at 1:38 PM No comments: